Kenny Schrub is a 26-year-old professional CSGO gamer from France and is known by his gaming name, kennyS. He began his gaming career in 2011 and has been playing for several teams over this time. The gamer is currently playing in the G2 Esports team as the AWPer. He has been on this team since 2017, and they have achieved numerous awards and won tournaments. kennyS is known for his aggressive gaming style that has led him to win tournaments and also got the MVP award on these games

Some of the most notable awards kennyS has received include featuring in the HLTV list of the best gamers from 2013 to 2017. He has also won the MVP awards in over ten tournaments, resulting in an impressive gaming career. kennyS is among the best gamers, and some of the success is attributed to the settings he uses while playing CSGO.

kennyS plays with a mouse sensitivity at 2.2, and the zoom sensitivity is 1. The mouse has a DPI of 400 and an eDPI of 880. This makes it easier to move through the map, making it easy to hit targets. The Mouse acceleration is disabled while the Raw Input is on to detect every movement on the mouse. kennyS’s Logitech MX518 Legendary mouse has a 500Hz rating for the best performance.

These are the in-game settings kennyS uses while playing CSGO. He uses an Nvidia GeForce RTX 3080 graphics card to comfortably run these settings. kennyS sets the brightness level at 80% and the display mode at fullscreen. The high settings are activated on Global Shadow Quality, texture Detail, Effect Detail, and the Shader Detail. He also sets the Multisampling Anti-Aliasing Mode at 8X MSAA and the Texture Filtering Mode at Anisotropic 16X.
kennyS also plays with the Multicore Rendering, Boost Player Contrast, and Uber Shaders enabled. These create a better visual display as he plays. He also disables FXAA Anti-Aliasing, Vertical sync, and the Motion blur options. These create a good balance and the perfect gaming condition.

The gamer plays with a Benq XL2546 monitor with a 240Hz refresh rate. He uses the 1280×960 resolution on the monitor and an Aspect ratio at 4:3. The scaling mode is also stretched to make the most from the monitor. kennyS has improved his gaming with this monitor as he can hit a high refresh rate and see them on the screen. 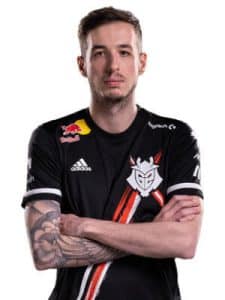