Nikola Kovač is popularly known by his professional gamer name, Niko. He changed it from NiKolinho and has been playing at a professional level since 2009 and has since won several awards in his career. He is from Bosnia and Herzegovina and began his gaming career playing Counter-Strike. He plays in the team G2 Esports with his cousin, huNter, as the rifler and AWPer. The ability to shift from these two positions with ease has earned him a reputation as one of the most mechanically gifted players in the history of CSGO.

Niko has also been nominated on several occasions for the title of the best player. Many professionals and gaming enthusiasts predict that he will become among the best in esports in the coming years. The gamer has achieved these high results partly due to the settings he uses on the games. He plays as an AWPer, a position that requires the best hardware and in-game settings. These are the settings Niko uses;

Niko uses a Zowie S1 pro gamer mouse, and it has a DPI of 400. The eDPI settings it at 604, and the Windows Sensitivity is 6. The gamer also sets the mouse sensitivity at 1.51 for easy turning to acquire targets and the zoom sensitivity at 0.90 for easy focusing on his targets as he plays the game. This allows him to zoom on other competitors from far easily.

The gamer uses a Benq XL2546 monitor for CSGO gaming, and it has a 240Hz maximum refresh rate. Thus, it ensures the game is clearer and that he can get as much detail from his surrounding as he plays. The resolution on the monitor is 1280×960, and its Aspect Ratio is set at 4:3 for the highest clarity.

These are the settings on the game menu and are made possible with the Nvidia GeForce RTX 3080 video card on the setup. He plays at fullscreen display and has an 81% brightness level. Niko sets the Texture Detail, Effect Detail, and Shader Detail at low. The Global Shadow Quality is at medium, and this creates the right balance in the game.

The Multicore Rendering, Boost Player Contrast, and Uber Shaders are enabled in the game. These work well with the Multisampling Anti-Aliasing mode set at 8x MSAA. The Texture Filtering mode is set at Anisotropic 8X and other settings disabled. These are the FXAA Anti-Aliasing, Wait for Vertical Sync, and Motion Blur options. These settings ensure he can have the best visibility in the game. 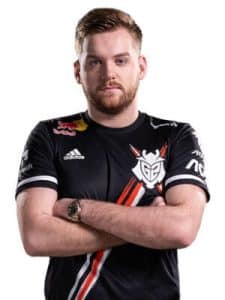 Nikola “NiKo” Kovač was born on February 16, 1997 and is currently playing for G2 Esports as a rifler.